This was the second year that the pair have used the nesting box.  The pair was very active in March and April.  The female was using the nest box and the male was catching food and shareing it with the female and I asuume that she was sitting on eggs.  The male was protecting the nest site against  Ravens and a coopers hawk.  The pair had five fledgings last year and they emerged first week of June.  All the activity came to an end about four days ago (27 April)   The Kestrals have disapered no sight of either one and no activity with the nest box.  Does anyone know what might have happened ?  Did a predator maybe destoy the eggs?  If so would the Kestrals then abandon the nest box and leave the site?  If the male was killed will the female remain in the box ???   This is really mysterious !!  Anyone have any ideas what might have happend ?The Nest box is mounted in a Joshua tree about 30 ft up.

It's difficult to say for sure what's going on here. It's possible that something could have happened to one of the adults and the other abandoned the nest, or that both adults were injured or incapacitated somehow. More likely are the possibilities that something has happened to the nest itself - either a predator getting into the nest cavity, or another cavity-nesting species such as European Starlings taking over the box. Or, since it was never confirmed that eggs were present, it's not completely out of the question that the female never successfully laid and eventually the pair moved on.

If the box is on your property, or it's elsewhere but you have permission to check it, we'd recommend taking a look inside to see if we can get closer to solving the mystery. If there's no sign of eggs, a predator hops to the top of the suspect list. If there's an angry starling inside, that would obviously be the likely culprit. If eggs are present and intact but cold, maybe something happened to one or both parents.

Regardless of what you find, we hope you'll document the site visit (you can use the datasheet below) and submit the data once you're finished. We'll keep our fingers crossed for good news.

The kestral box is just outside my property and located in the Prime Desert Woodland. I keep a close eye on the box from my back yard.  Have not  seen any starings  in the box but they are aound the area. I will go up and inspect the nest soon and send pictures

This morning I went up and inspected the kestrel box.  I  removed the roof and took some pictures - Just under the roof was a bee honeycomb  attached to the side of the box.  I removed the honeycomb.  There were five undamaged eggs in the nesting material in the bottom of the box.  I belive the female Kestral was sitting on the eggs. I heard and saw a honey bee swarm last saturday but didnt pay attention to where it went - I think the swarm went ino the box and stung the female she left the box and then flew away and died of the stings   There are thousand s of bees in a swarm.  The male then abandoned the area --  the mystery is where are the bees now -- the honeycomb was unused  so I thing that might have been in there for a while and the bees came back --maybe the queen didnt like the kesatrel box and hey went somewhere else..    Are the eggs still good - should I remove them and put under warm light ?  Is there someone that breeds kestrels that might want these eggs? Picture below first shows the eggs second the honeycomb attached to wall and finally a more detailed picure of the honeycomb 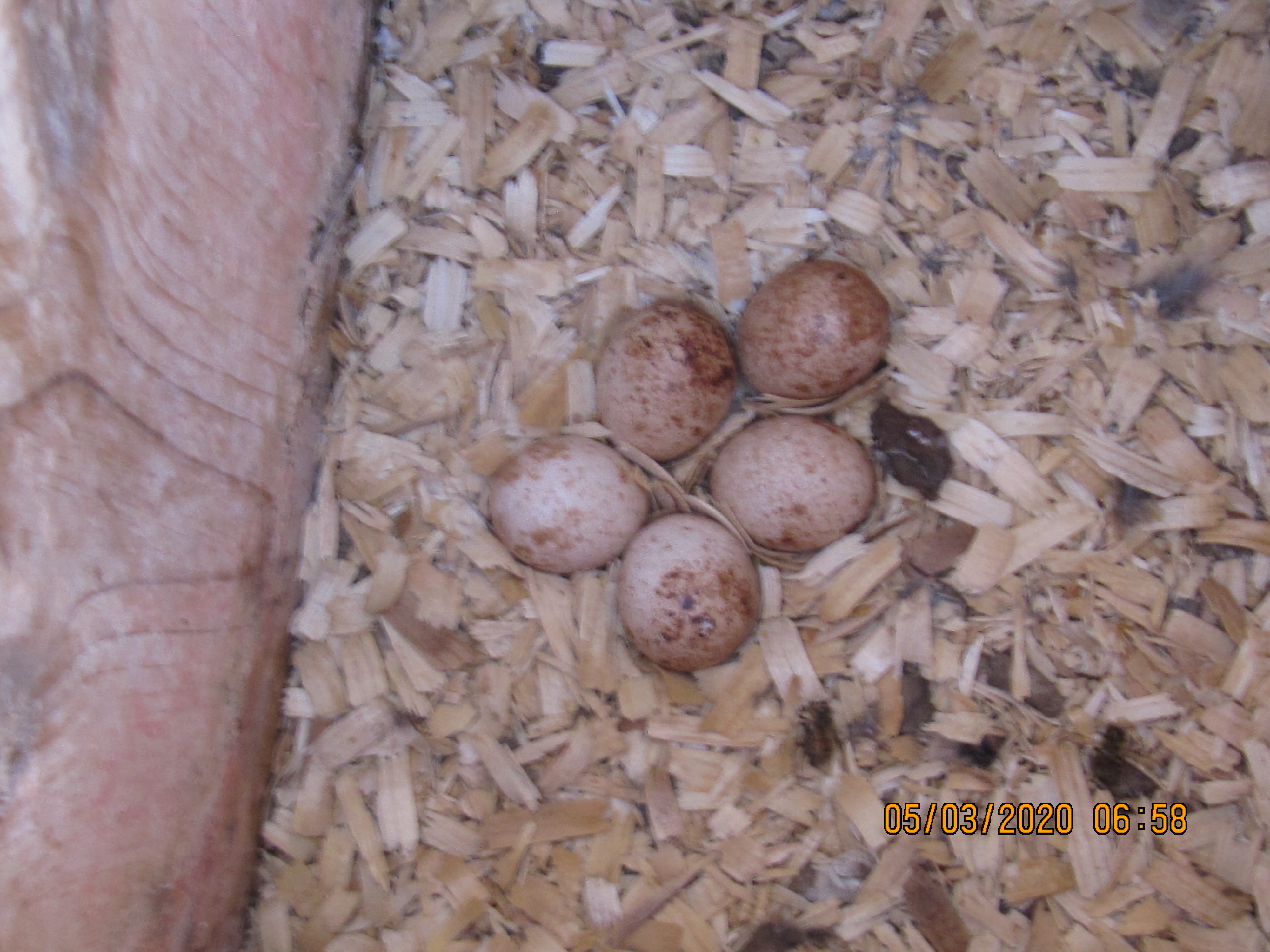 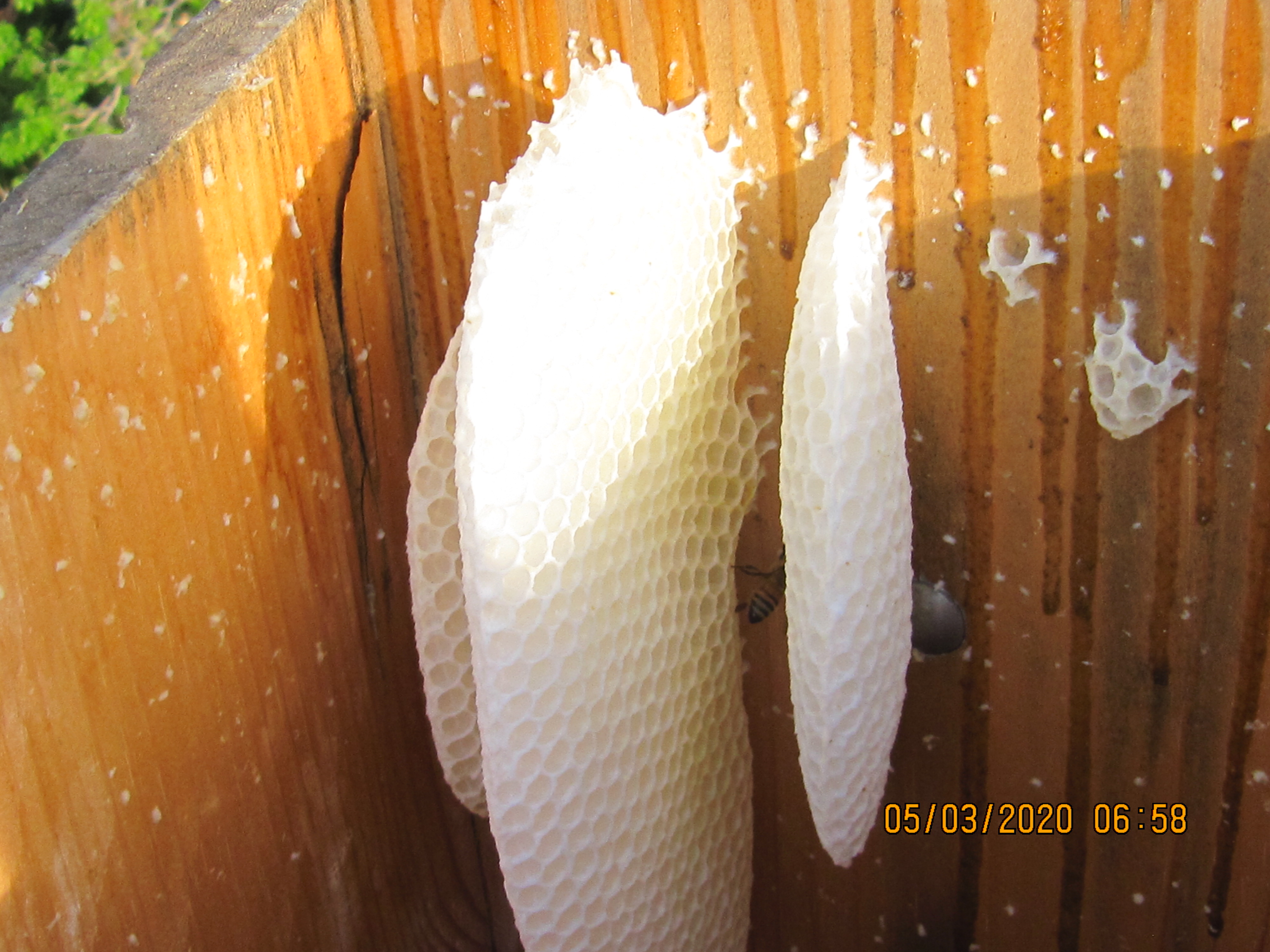 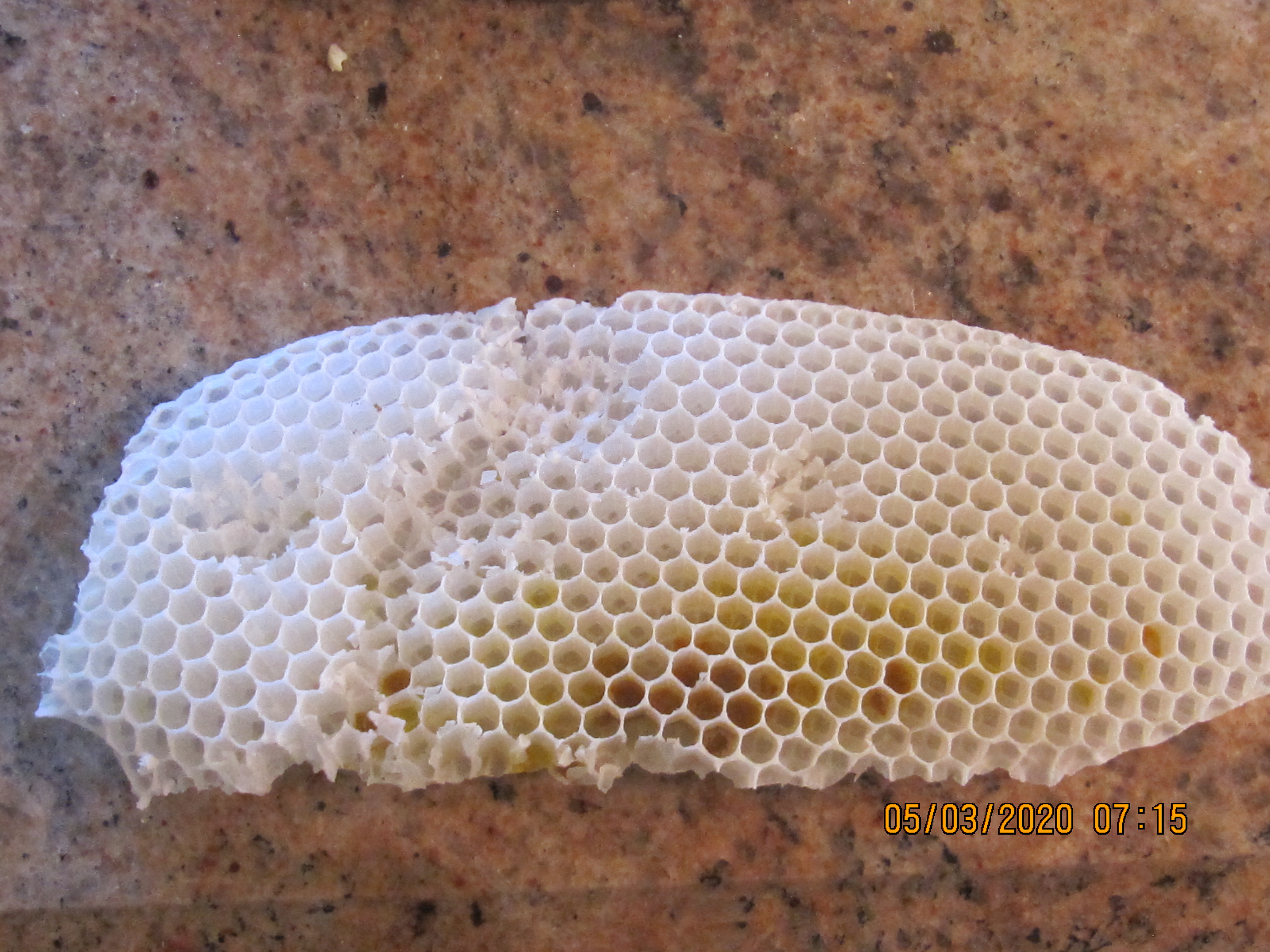 Well, this isn't the result we were hoping for, but it does look like the bees evicted the kestrel family. It's quite possible the female simply abandoned the nest rather than being killed by the bees, but unless you find her again there's no way to know for certain. The bees' rapid evacuation is confusing, but you could certainly be right that they started to move in before finding it unsuitable and leaving again.

As for the eggs, they can remain viable for up to two weeks without incubation, so given that the bees are now gone you should wait that long to see if the parent kestrels return. It is illegal to remove anything from an active nest, or to attempt to hand-raise wild bird eggs or young without proper permits, so the eggs should absolutely not be disturbed until after that two week period passes and it is known that the nest is no longer active.

If you haven't done so already, please submit your data about this incident. Data on nest failures is every bit as valuable - arguably more so - than that on successful nests.

Have not seen any kestrals in or around the box now going on three weeks.  I submited the data about the incident into the data base    So a bit confused on when I can remove the eggs and or take the nest box down for cleaning   -- your last post said two weeks but I checked the Dept of Fish and Wildlife regulatins and it might be longer  -- can you give me some advice -- we havent  found anyone with a permit

Federal law would allow for the box to be taken down and cleaned at this time, but we aren't 100% certain about state or local laws. Looking briefly at California's regulations it looks like you'd be ok - with the nest inactive this long, cleaning wouldn't qualify as "adversely affecting the survival... of the eggs" in our opinion. If you've found something to the contrary please let us know, but otherwise we think you're ok to clean the box and prepare it in hopes of some new tenants.

Thanks for submitting your data, and for your ongoing participation in the project!

Thanks Mathew  Can I keep the eggs ??? maybe create some kind of artistic display with the kestrel pictures  might be the last time the box is used

Sorry, but no, possession of kestrel eggs is prohibited by the Migratory Bird Treaty Act.

Its been over a month now with no Ketrels sited . I want to take the box down and clean it out and remove the eggs  and put in new nesting mateial.  Is this Ok with the federal law  and how do I dispose of the eggs .  I am planning to relocate to another tree nearby

Yes, at this point the nest is demonstrably no longer active and you can take the box down for cleaning. The eggs can either be thrown out, or you could just leave them on the ground for a scavenger to find. Just make sure to not do so too close to where the new nest location will be or you'll potentially attract predators to the area.

To handle the data side of this, please delete the old nest location (to indicate it is no longer present) and submit the new location as a new nest.

I wasnt planning to move the nest location just clean out the box and reinstall.  Do you think its better to relocatre the box to a nearby tree rather than put it back up in the same location ?

My apologies, I misunderstood. No, reinstalling it where it is would be ideal.