Any tips to keep Starlings out of the Kestrel box? They have had 2 clutches so far this year and all eggs have been stolen before they hatch.

We have watched the Starlings perch on the roof then dip into the hole of the box. The Kestrels fly in.

If you starlings have had 2 clutches and there are still no Kestrels in site then the Kestrels have no interest in the nest box.

If Kestrels had an interest in the nest box they would not allow the starling to nest.

What do you have for nesting media?? Starlings typically remove wood shavings and replace with grasses.

This is what we have seen over 10 years of monitoring 2 nest boxes.

If you can supply a photo of the nest box maybe we can help with additional advice.

Tune to our 2 camera HD LIVE STREAM at http://www.nu-sun.com/html/2020_report.html

You can also watch a video of our new nest boxes on this page. 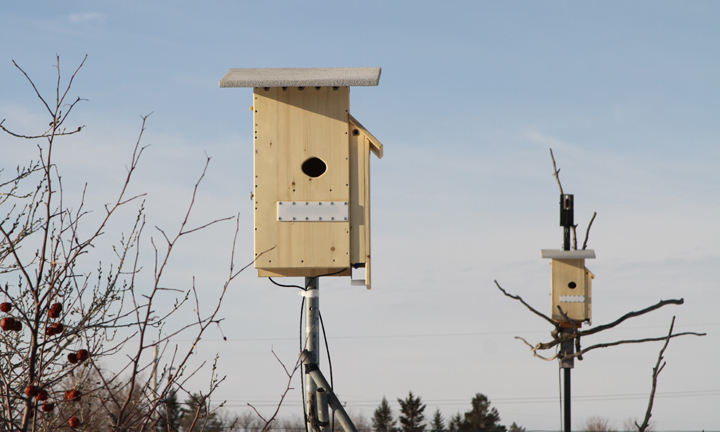 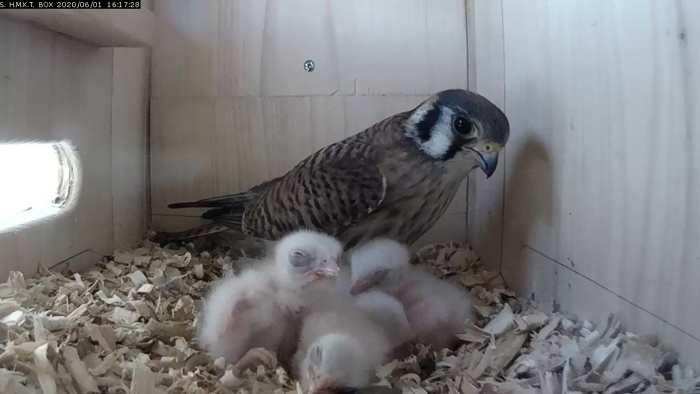 Nu-Sun is correct that if kestrels had wanted the box this year, they likely would have evicted the starlings. That's not to say that kestrels won't be interested in the box in future years, though, especially if this box is new this year. It frequently takes at least 2-3 years before American Kestrels take up residence in a new box. So we highly encourage you to keep monitoring and maintaining this box despite the lack of interest (well, from the correct clientele) this year.

As for keeping the starlings out, we don't currently have any recommendations on physical modifications to the box. Starlings are acrobatic and persistent and nest in all sorts of bizarre places, so physically excluding them while still allowing kestrels to use a box could be very challenging. If you find something that works, by all means let us know! The only trick we can really give you is just persistence. If you repeatedly remove starling eggs, the starlings will EVENTUALLY get the idea and move along.

In the meantime, we highly encourage you to submit data on your nest box even though you don't yet have kestrel residents. Data on kestrel-less boxes is arguably even more valuable than data from occupied boxes, as it allows us to look at a whole host of factors we can't examine with data from occupied boxes alone. These include why kestrels pick certain nest sites over others, shifts in range and population size, what other species kestrels have to compete with for nest sites (and how often), and much more.

Good luck! If you have any further questions don't hestitate to let us know. We're happy to have you as part of the American Kestrel Partnership.