Just persist in regularly and frequently tossing their furniture in the street. My experience has been that 30 years ago when we started putting up wood duck boxes, it was a constant battle. We wondered if we'd ever have any wood ducks get to use them. But, very interestingly, after us constantly staying after them, they quit bothering those nests for several years, but did bother new nests. So we rinsed and repeated. Then they started leaveing other new nest alone. Never had a problem with a starling for 20 years thereafter.  That was until year before last, and guess finally the group lesson had been forgotten. And, they punctured wood duck eggs, ruining the nest. So, we began the re-educating year before last. Little problem last year, but had help from the kestrels who will give them what for if they get around their nests or make the mistake of going in.  Keep at it. You'll win the battle. And if your starlings like ours you can have lasting effect.  Do learn what a starling nest looks like, so you are only tossing out starling nests.  House wrens are about only other thing that builds a nest in the box. Usually they tend to nest later and after ducks or kestrels hatch.  Also, when you see starling around a box and crawl up but see none of their loose trashy nest, look closely for a fresh green leaf. Not sure of the meaning, but guessing it might be put there by a male to attract a female to that site. But if you see that and don't know what a starling nest looks like, don't remove the green leaf and you'l likely get to see what starling nest and eggs look like. The house wren nest is huge and very coarse twigs whose relative size to the wren would be like us carrying a 5"  eight foot wooden fence post. Actual feathered soft nest cup is about thimble sized, in the twig pile ; )

Good Luck. You and the kestrels can whip those starlings.
Rich

Thanks. Yes I have a bb gun that I use. I don't try to hit them just the box to scare them off. As the other poster who replied stated hopefully the kestrels will want the nest box enough that they will chase the starlings away.

The bottom line is. If the Kestrels want the nest box bad enough they will evict the starlings. This comes from many years of studies of the Kestrels. If the Kestrels do not rid your box of starlings this nest box or area is not that important to them. No need for violent actions against wildlife !!!!

If you would like more information about American Kestrels and our research work, link to Kestrel Korner

Thanks - no injury to wildlife here...just a bb gun to hit box to scare them off. Hopefully the pair of kestrels we had last year, another young couple, will be attracted to the box this year.

As Rich stated, if you're embarking on any sort of harassment campaign, whether it's "tossing their furniture" (we love that term) or a BB gun or anything else, you need to be 200% sure that the species in question is European Starling. Nearly all native species are protected by the Migratory Bird Treaty Act, and harassment of any sort is illegal. Starlings, being non-native to North America, are not protected, and therefore exclusion efforts are allowed.

We unfortunately don't have many suggestions other than what has already been covered here. Starlings are persistent buggers, and ultimately a patient and diligent exclusion campaign is going to be the most effective solution.

They are persistent buggers indeed! A pair of Starlings were checking out our new box and I made a goat call via our nest box cam speaker and it sure scared it out! It was hilarious!

Hope you resolve your Starling issue. 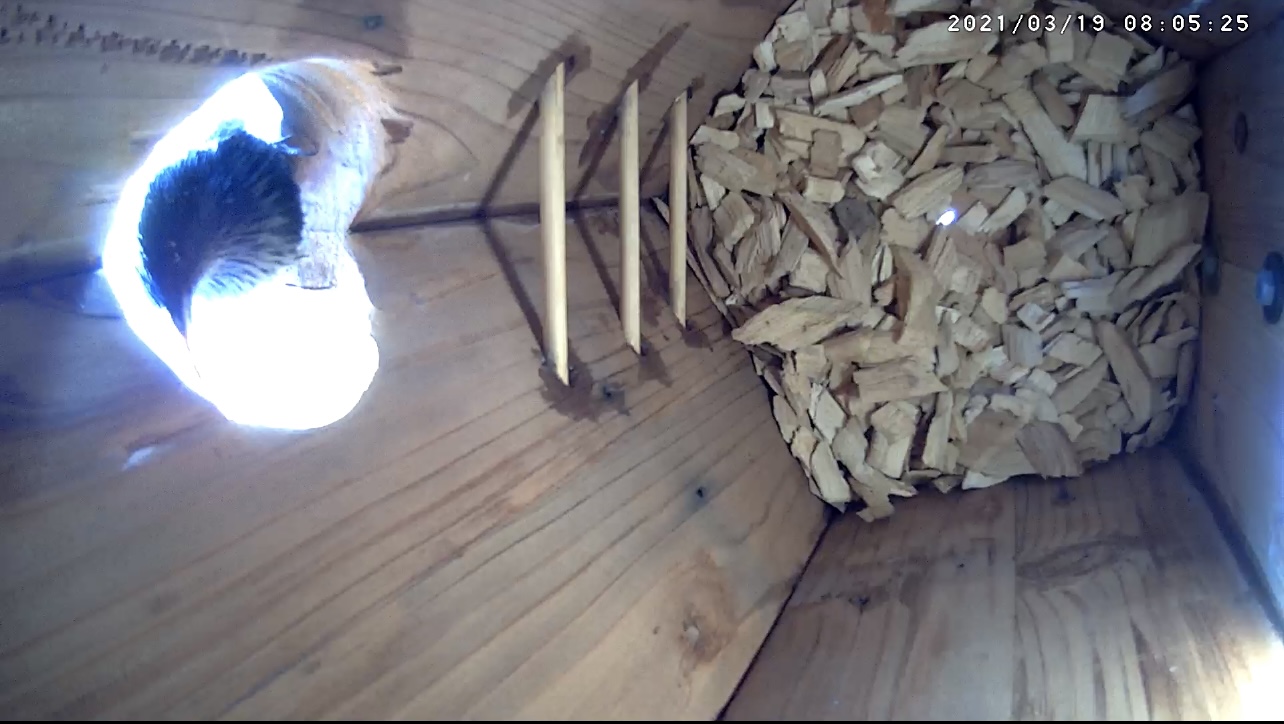 Please tell us your camera records sound and there's video of this.