Hi all, my name is Jen and I'm coming to you from St. John in the US Virgin Islands. I found this group online and hoping you might be able to help.

Just a few days ago we found 2 kestrels dead on the ground about 10 yards from the nest, both with blood coming out of their mouths. With a little research, I have to assume they ate a frog, lizard, or mouse that had earlier eaten poison from a neighbor's yard. It was devestating to think someone had carelessly caused this horrific scene. Has anyone else experienced this? Any suggestions on how to stop it??

There were 3 kestrels and 2 died. I don't know which one was left behind, but this morning I hear the glorious cheeps of a kestrel outside the nest and watch him (her?) fly over to a nearby perch, where another kestrel sat! Has anyone else found that kestrels pair up again so quickly? I don't know whether it's the male or the female kestrel that remains from the original trio. Is the behavior different between the sexes when they lose their mate? I'm over the moon to know they will carry on!

My last question is about what a female kestrel looks like before she lays her eggs...one of the kestrels I saw this morning sure looks like she's hanging a low belly, but who am I to judge. How do you tell if a kestrel is pregnant? I don't see her peeing on a stick.

Thanks in advance for your knowledge, help, and time! 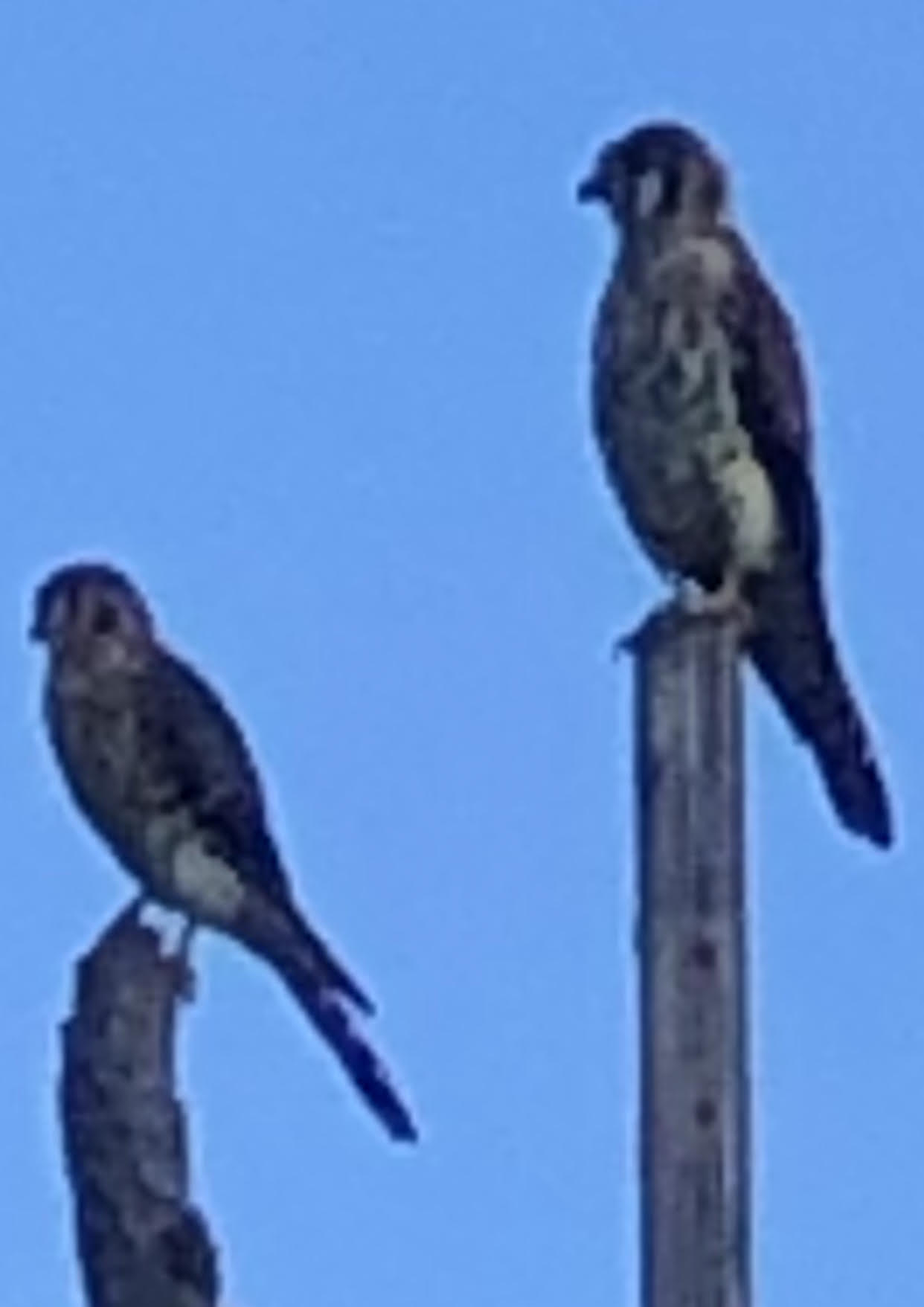 We’re so glad you’ve found us! We’ll do our best to answer your questions.

Bleeding from the mouth can be a symptom of severe head trauma from incidents such as window strikes or vehicle collisions, so we’ll likely never know for sure what happened to the two birds you found. But you could very well be correct that a toxin such as an anticoagulant rodenticide could be to blame.

Thankfully incidents of this severity are somewhat rare, as a single poisoned mouse is enough to kill an entire family of kestrels, both nestlings and adults alike. But rodenticide poisoning on a less severe level is far from uncommon. A 2010 study at a Massachusetts wildlife rehabilitation center found while 6% of the birds of prey sampled were exhibiting enough symptoms to be diagnosed with rodenticide poisoning, a whopping 86% had at least some level of these chemicals in their bodies.

The only good way to reduce the risk of rodenticide poisoning to birds of prey is to reduce the usage of these rodenticides in the first place. One of the best ways to do that is to increase the number of birds of prey in the area. Several of our Partners have had great success reducing populations of voles, mice, and other pest species on their properties by installing kestrel nest boxes to entice these feisty hunters to take up residence. The kestrels take care of the pest species without the need for pesticides, which can indiscriminately kill all sorts of unintended targets - including pets. Spreading this message via social media or face-to-face interactions with friends and neighbors (and encouraging them to do the same) is probably the best suggestion we have for reducing mortalities from rodenticide poisoning.

Without knowing more about the behavior you’re observing and the birds you’ve been seeing, we can’t begin to speculate on what the behavior you’ve described. Did the trio you describe work together to raise a clutch of eggs this year? Or did they only start associating together after the breeding season ended? Are all four birds you’ve seen adults, or were some (or all) hatched this year? Have you observed any mating or courtship behavior?

Not much is currently known about kestrel pair formation, particularly outside of the breeding season. Answering your questions about how quickly “widowed” kestrels form new pairs and whether this differs between the sexes requires being able to identify individual kestrels, but this is no small feat. The smallest GPS trackers currently on the market are still too large to use on kestrels, and the low probability of resighting banded birds further complicates our ability to observe the actions of individual kestrels over time. Current research is being done using a newly-developed radio transmitter technology, but we’re still a little ways away from seeing the first published results.

Even how kestrel pairs maintain throughout the year is currently unknown. Early research indicates that American Kestrels may form pairs on their wintering grounds, but whether these pairs are leftover breeding pairs from the previous year, newly formed pairs that will breed together in the next year, or a separate pairing for the winter season only is yet to be determined. As we stated previously, it’s an odd time of year for a breeding pair to be forming, but the birds you’re observing could be one of these wintering pairs. In short - we’re not really sure what they’re doing! Hopefully they’ll hang around long enough to give you a better idea of what they’re up to.

Kestrels don’t externally show that they are pregnant, so you likely saw either just a very fluffed-up bird or a particularly chunky one. It only takes two days from fertilization until the egg is laid, so there isn’t much of a “pregnancy” to speak of in American Kestrels anyway. We also wouldn’t typically expect there to be eggs being laid this time of year (in most of North America, the eggs are laid between March and July), though the timing could be different in your area.

And now - our turn to ask you questions! It sounds like you have a nest box (or natural nest cavity) nearby? If so, we’d absolutely love it if you’d be willing to provide observation data about your nest to our database. We currently have just a single nest box being monitored outside the continental US and Canada and none on Caribbean islands, so data from your area would be an extremely valuable addition to our research. If you’re interested, let us know and we’ll be happy to talk more about how to get involved. You can reach our staff directly at kestrelpartnership@peregrinefund.org.

Thank you for reaching out, and welcome to the American Kestrel Partnership! Please don’t hesitate to ask if you have any further questions.