I've had the luck to have a breeding pair of American Kestrels (Kevin and Ellie) nesting in my attic in San Diego for the past few months.  They had a hatch and it appears that only one of the nestlings survived.. Yesterday this courageous little girl/guy, Norma, (I think girl) made the 20' jump to the sidewalk below.  She is too small to fly and has spend most of the time sitting in the driveway near some potted plants (and occasionally roaming around).  Kevin will come and go, however I haven't seen him feed her anything since yesterday.  She seems way too young to be out of the nest and ran around a bit yesterday but definitely seems far off from flying (based on the nestling guide I'd estimate ~20-22 days old).  Should she have fledged this early?

I'm in a suburban area however we have limited brush/grassy areas and I think she may wander off into the street.. I'm also worried that a raccoon/cat/opossum will get to her at night since there are no real bushes or trees to hide in, however I don't want to interfere with the parent bond as I know she still has lots of development needed and will need them around for months.

Is there anything I can do to increase her chances of survival?  considered trying to get her back in the nest, however was worried that would hurt the bond or that she would just jump right out again and risk injury.  Last night we left out a box with a small opening that she went into and hid/slept through the night.  Made it through one night but the stress is killing me!  This morning she is just calmly sitting in the driveway, but is not calling for food like she usually does from the attic.  I've heard/seen Kevin around with a small mouse but he has not yet fed her..

Any help/suggestions would be great, thanks! 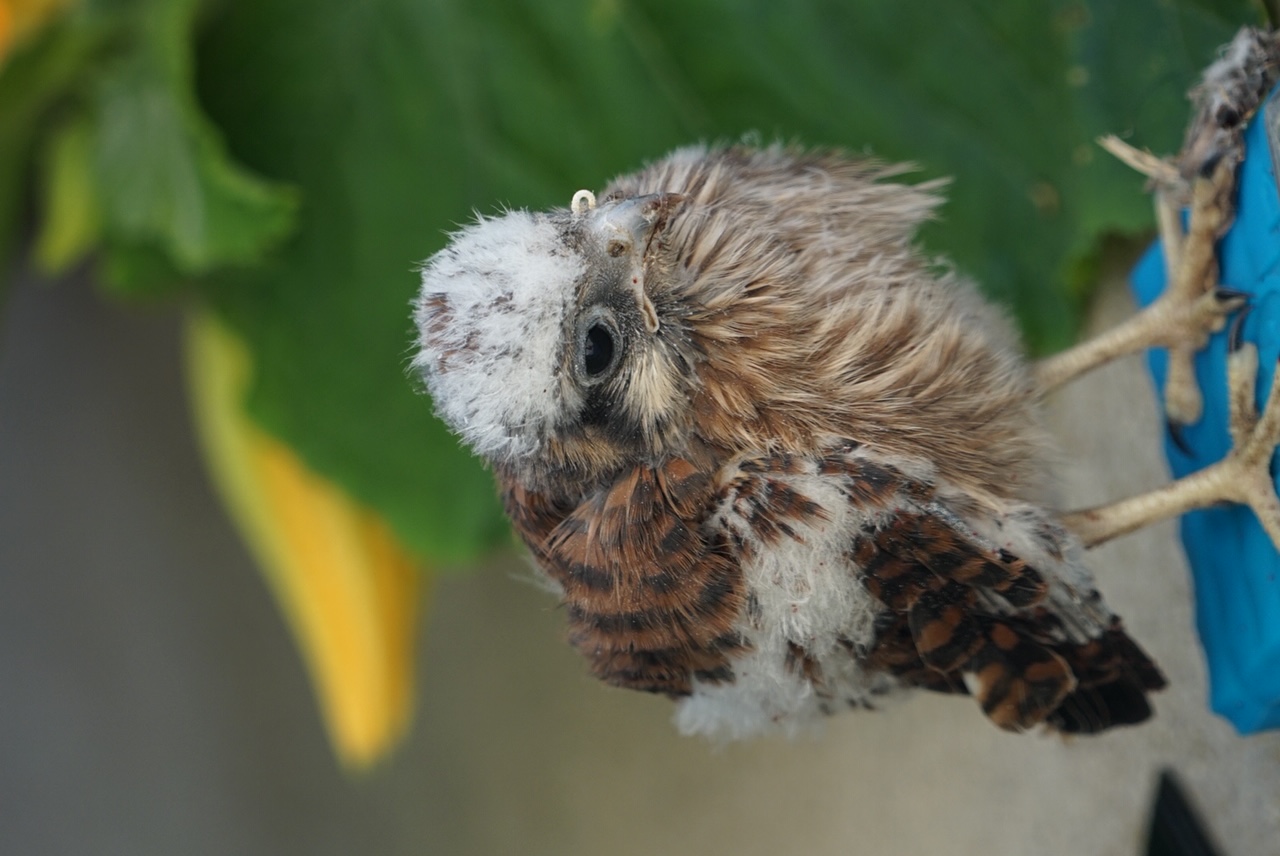 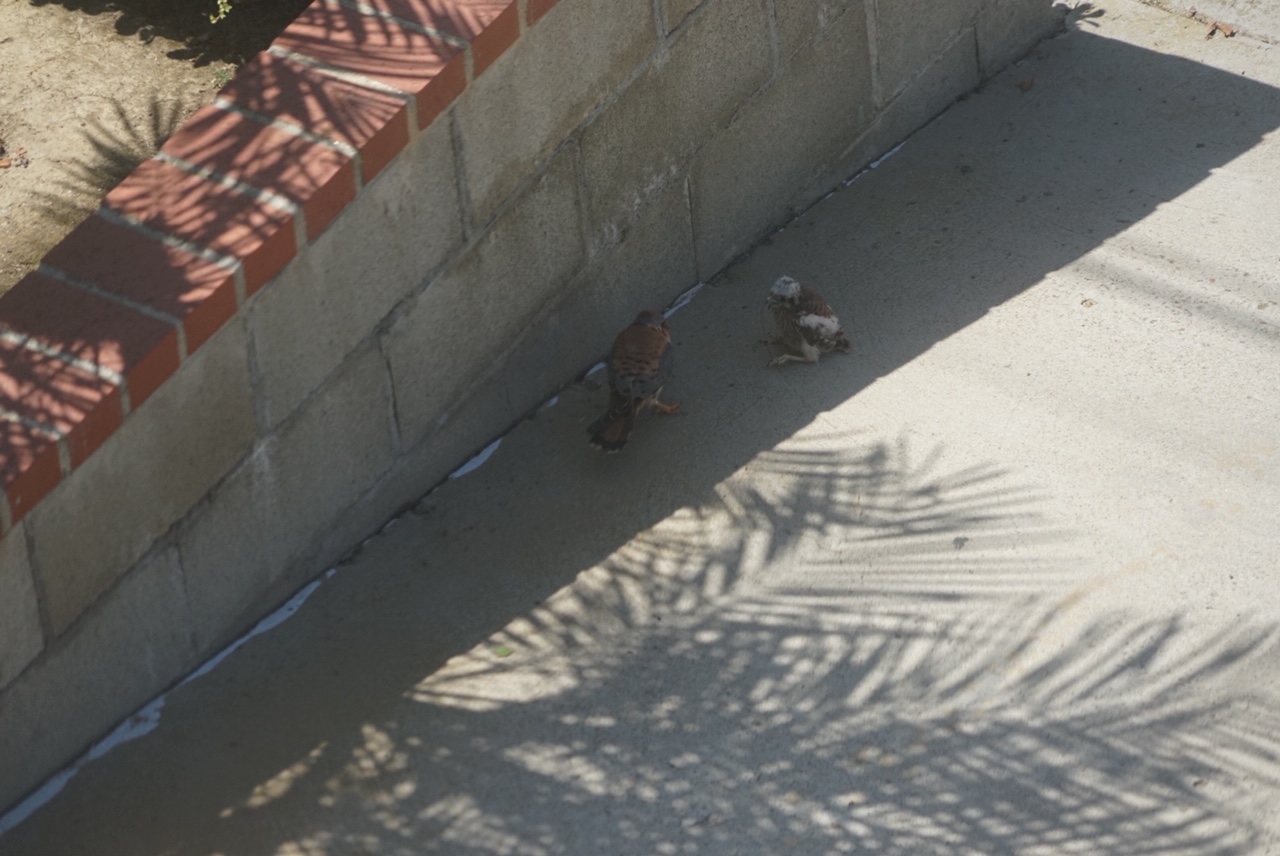 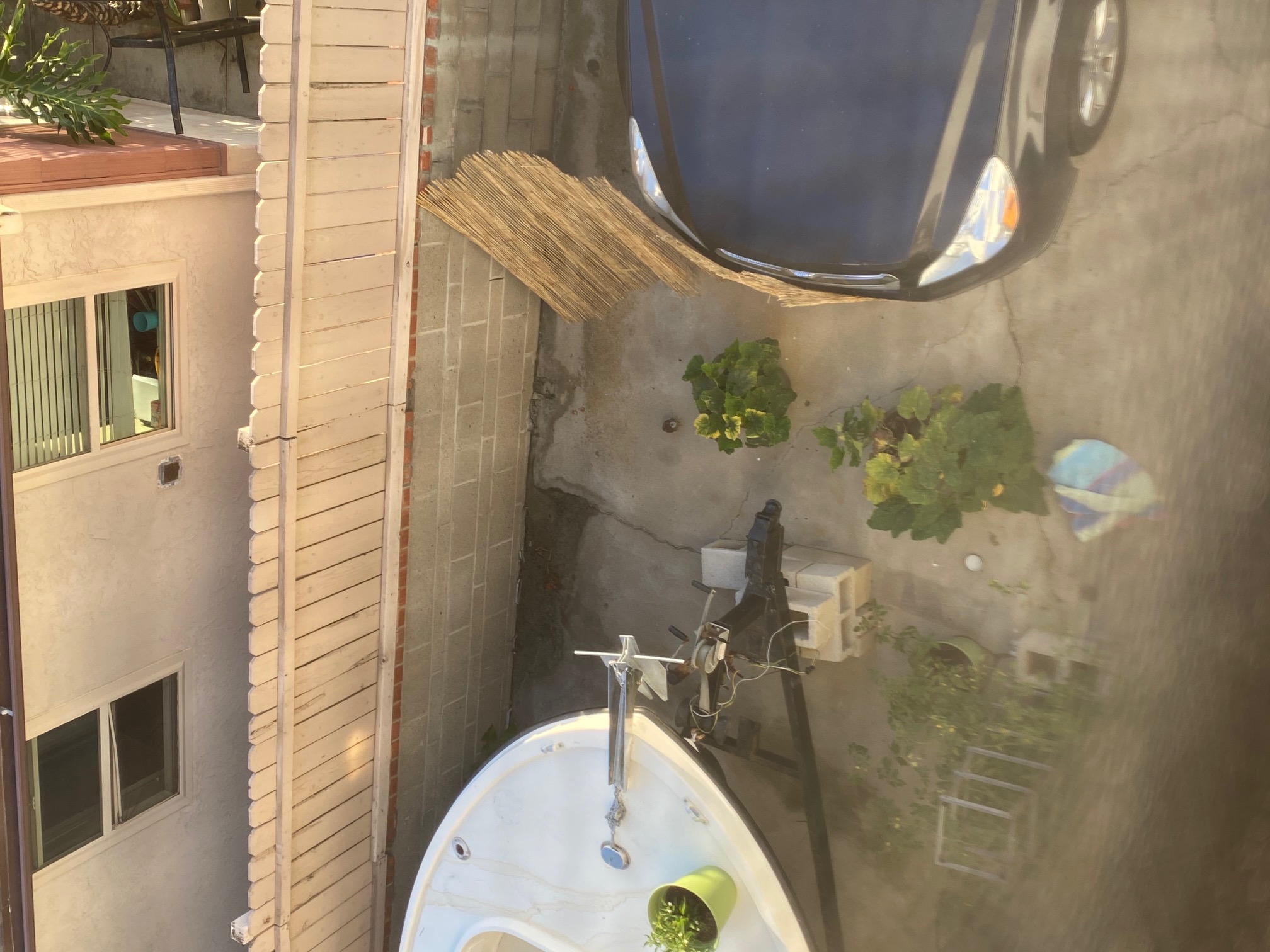 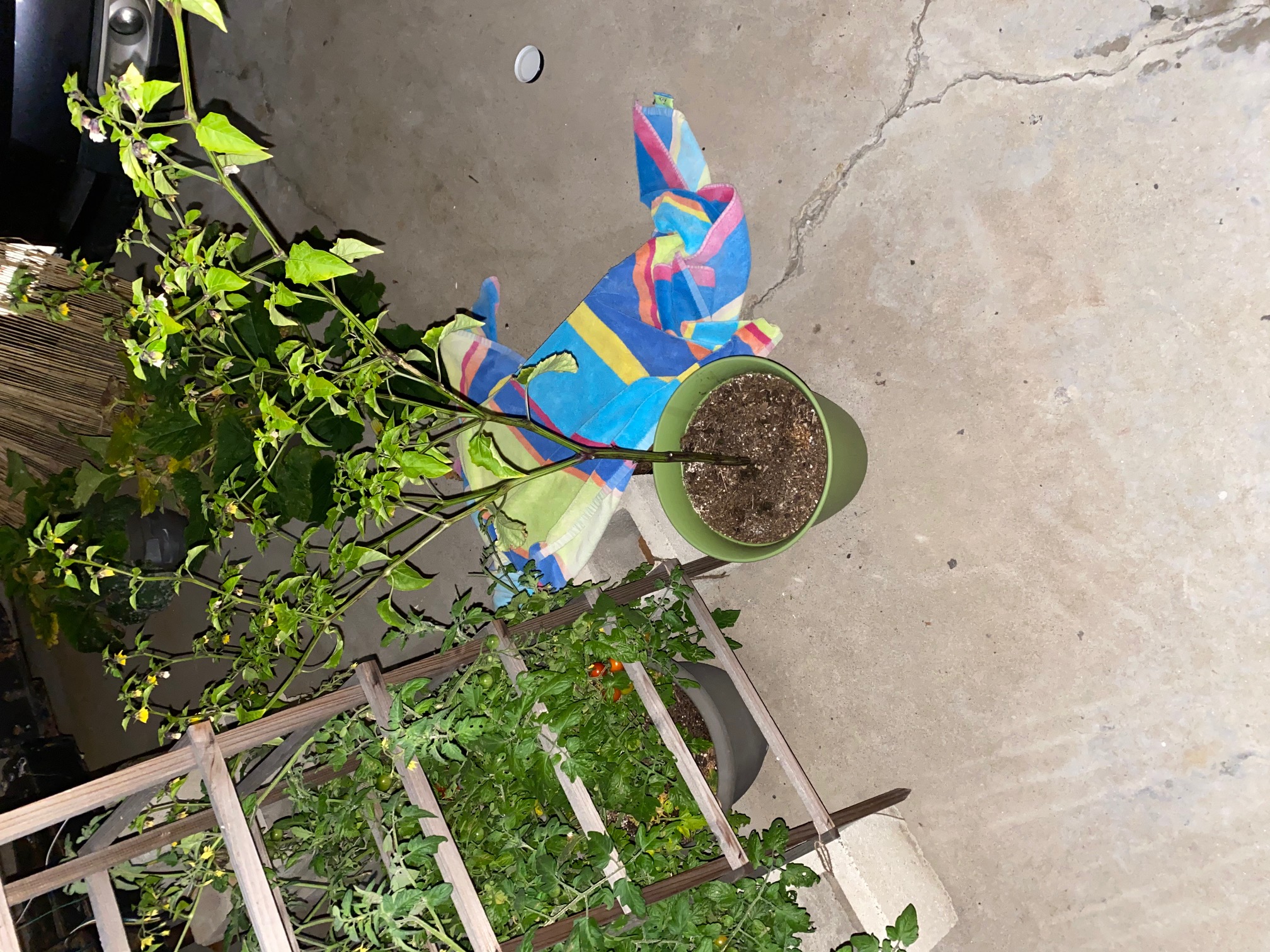 You are correct that this nestling is a female, and that she's out of the nest earlier than she should be. We agree that she looks to be about 20-22 days old, which means she shouldn't have fledged for about a week yet.

There are a number of factors that will determine what your next step should be—for example, the current health condition of the nestling, the attentiveness of the parents (or lack thereof), and whether something happened to the nest that caused her to leave early. We strongly suggest you contact a wildlife rehabilitator, whose staff are trained to handle situations such as this and can walk you through how to determine if you should intervene, and if so, how. The main one in the San Diego area appears to be Project Wildlife. We recommend calling them at 619-299-7012 at your earliest convenience.

Good luck, and keep us posted! We'll keep our fingers crossed for this little girl.

Thanks, Matthew for the quick response.   Sadly, things took a turn for the worse later this morning.  She wandered around for a bit but wasn't calling out, then she took up a place in the middle of the driveway and sat still for over an hour, not even calling when Kevin (dad) was in sight..  I found her lying down with her eyes shut and when she tried to stand she wobbled and fell over looking sick.  I gathered her up in a box and rushed her over to Project Wildlife and it seems that she just barely held on (gave a few chirps with her eyes shut as they unloaded her into a new box to take her in).  Fingers crossed she makes a recovery, but heartbroken that I had to take her away from her parents..

Yesterday evening we found a dead lizard in the corner near her, and assuming that one of the parents had brought it in, we put it near her and she ate a few bites but then left it alone.  Looking back on it I'm wondering if this lizard may have been dead for some time of previous causes and not fresh kill..  I really hope that this is not the cause of her illness (maybe a diseased lizard/ had been dead too long?) and am kicking myself this morning realizing what I may have done..

Any idea if that is possible?  Or if there may be other reasons?

We're very sorry to hear of this development, and we fervently hope she pulls through and makes a full recovery. She's in the best possible place she can be right now and getting the best possible care, and she has you to thank for that, so please don't beat yourself up over any of the actions you took.

There are a host of possible options that could explain the turn for the worse this bird took, and the rehabilitator likely ran a battery of blood tests and other diagnostics to determine which is the cause here. A bacterial or viral infection could be responsible, including West Nile Virus, which is still uncommon in California but has been documented in San Diego County. Poisoning is another possibility. If the parents fed this nestling a mouse or vole that had consumed a rodenticide, or insects that had been affected by pesticides, these could then affect the nestling and cause the symptoms you observed. It's also possible that these were just inexperienced parents who weren't providing enough food for their nestlings, and the symptoms were caused by malnutrition and/or dehydration. You mention that the male is still around, but has the adult female been seen recently? If she's disappeared, that could also be a factor in what's occurred. Unless the rehabilitator is able to provide an update with their diagnosis, we'll likely never know.

There's a small chance the lizard was involved, but it wouldn't be our first guess. Given that none of the other nestlings survived and this bird left the nest so early, we suspect something else was already going on. Regardless, you shouldn't beat yourself up. You were just trying to help using the information you had at the time.

If you have kestrels nesting in your attic again next year, we hope you'll consider submitting data on the nest to our database. With the species in decline across the country, documenting nesting results (both successful and otherwise) is a critical part of our mission to understand and reverse the causes.

Thank you so much for reaching out, and for helping this nestling. If you get an update, we'd certainly like to hear it. And if you have any other questions, we'll be happy to answer them.

Thanks for the message, unfortunately this one is not a happy ending for our little Kestrel girl :(.  It doesn't sound like she lasted too long after being dropped off at Project Wildlife and unfortunately I guess we will never know what exactly happened to her.  After a few days of looking for her and repeatedly calling, the male and female are starting to act very strange again.. Possibly another mating for the season?? It seems out of season, but who knows..  He is chasing her tree to tree.  I will keep you updated.. In other news, we randomly came across a thread of some amazing photos of a pair of Kestrels mating in our neighborhood 63 days ago.. Guess who!? One of our neighbors had seen them in their favorite tree back in May.. https://www.reddit.com/r/sandiego/comments/ggskxk/american_kestrels_mating_in_a_palm_tree/

After the nestling fledged one thing has become very clear.. The nest must have been INFESTED with bird mites.. They are currently coming in every crack from the attic as I'm guessing that they are looking for a new food source now that the babies are out (it doesn't seem like the parents are sleeping in the attic anymore, although they are still hunting and calling from nearby trees).  I'm wondering if this could have been one of the reasons that some of the nestlings had died and why she had decided to fledge early?

Either way I feel like i need to attack this infestation at the source to rid the house (and a potential future nest hopefully) of these pests.. Any recommendations?  I'm hesitant to use something with pesticides, but because this is a very hard to get to place in the attic I'm not sure I have any reasonable options other than some kind of fogger in the attic, but I'm very hesitant to harm future nestlings or the parents.. Any ideas or recommendations??

I'm will definitely submit data on any future developments with this pair, although viewing the actual nestlings would be very difficult as they are hidden away in a corner soffit in the attic... Alternatively I could consider building a box nearby and seeing if they would nest there (although I would imagine they would still return to the attic).

Is there any worth in submitting anything from the past few months?

Very sad to hear, though not entirely surprising given your description of her condition when you dropped her off. Our condolences for her loss. It seems very likely to us that the mites were the culprit behind her early fledging and loss as well as the loss of her siblings (except perhaps the initial nestling).

It is extremely late in the season—about a week later than the final nests were initiated in a recent study of American Kestrels in Idaho—but given your location in southern California it isn't inconceiveable that this pair would try to raise another clutch this year. That said, after their nest in the attic failed it's unlikely this particular pair would use this location again and will likely find a different location in the neighborhood for a new nest, if there is one.

On the off chance that the parents do try the attic again, the safest treatment option is to dust the affected areas with diatomaceous earth, or DE. It damages the exoskeletons of mites and other insect pests, causing them to dessicate, but won't cause harm to the birds. It is commonly used to treat mites in domestic poultry and to prevent insect pests in gardens. Note that insecticidal DE is not the same thing as the type sold for use in pool filters, which has been heat-treated to change its structure and can cause respiratory distress if inhaled.

Because your observations thus far haven't been conclusive looks at the contents of the nest, there isn't really anything worth submitting to our database, though we sincerely appreciate the offer. Depending on the height and exact setup of the current nest cavity, we may have some suggestions on ways you could potentially monitor the nest without needing to directly access it. And as you said, you could also try to coax them to a new nest box. More information on boxes and the monitoring process can be found here. We sincerely appreciate your interest in participating—we couldn't do what we do without the help and support from caring individuals like yourself.

Again, our condolences for the loss of this nestling, and best wishes for a more successful season next year. If you have any questions, please don't hesitate to contact us.