I've been lucky enough to get to use a decent sized shop for a short while. I've always wanted to build boxes for screetch owls, kestrels, and flickers to add to the wildlife habit modifications here. My situation is urban and we've had a fair number of kestrels over the years. However, we have seen few for about the last three years. Below are some photos of the current state of my kestrel / screech owl / flicker boxes.

I started with the plans from Nestwatch. However the flat roof situation didn't sit well as last year we had the wettest year in recorded history and this year we are outpacing that. I think we're about 14 inches above normal. Anyway, I modified to a 15% slope for the roof and sides and had to bevel the top edge of the front panel in order for them to fit well. This brings me to a bit of a predicament. Those same slopes, while good for shedding water, make a top-hinged side for cleaning nearly impossible. I'm considering making the front of the box the clean out panel. Since writing this I've seen similar efforts on YouTube. If any of you have feedback on cleanouts, I'd love to read them.

As with all houses I've seen this far, the back panels are longer for mounting. Now that I know where they are going. I may need to modify how the box is placed on the back panel. I'm planning on putting the boxes under the eaves of the higher roof looking out over the lower one. That will protect them quite a bit more than an open metal pole which could end up as a lightning rod. Has anyone done something similar? It's a fairly well protected location. It does get heat up there though.

I'm having trouble finding either solid brass or stainless steel Screw-in Square Bend Hooks. I'd rather not have to replace hardware later so would prefer to have fewer things to worry about.

Rather than use screws in the top of the opening side (which will probably just be the front of each box) I'm thinking of using a brass piano hinge. The gap I mention next might kill that idea. Thoughts?

If I make the cleaning side the front, I'd probably have to move the front panel down a quarter inch or so in order for it to swing upwards. If I did that, it would leave a gap right under the roof when closed. Ventilation? Since I wrote this, the aforementioned YouTube video below seems like they did the same thing.

I know almost everything says not to paint boxes. Given that I'm a little worried about heat/sun, I wonder if a non toxic white or other light color might be acceptable on the exterior only. I did see a video here:

that speaks about colors (dark being best) and references a website (https://www.coastwildlife.ca/)
for more info. I went to the website and don't see any of the info they mention.

Here are the boxes. Two styles... One for kestrel/screetch owl and another for flickers. Hole size is the same. Kestrel box is more girthy while flicker is taller and slightly more narrow. In practice I've read that any of those species can be in either box. 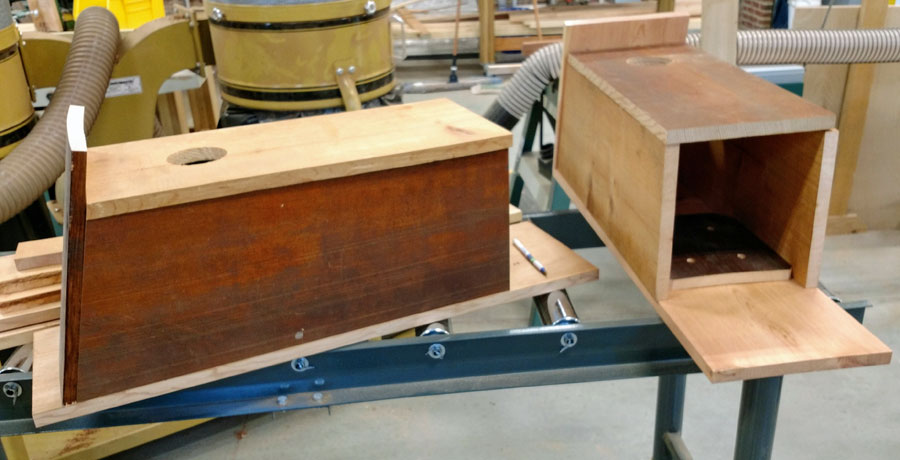 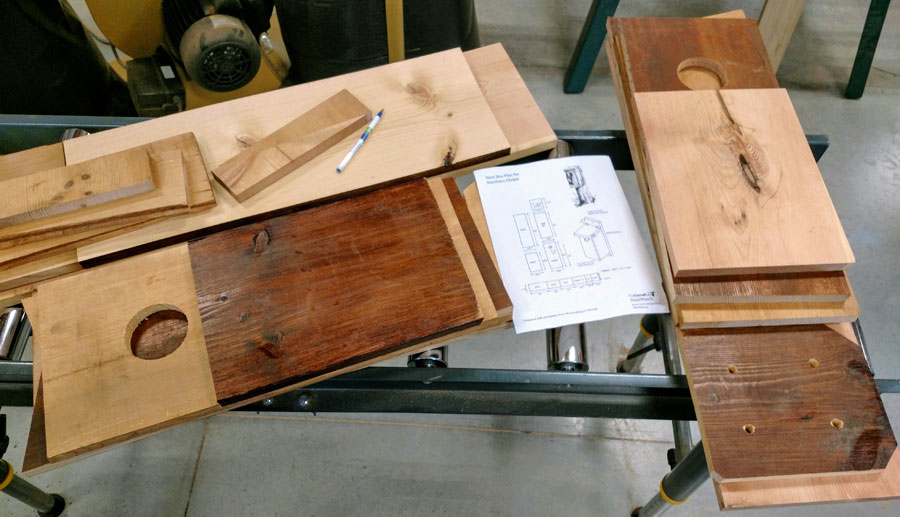 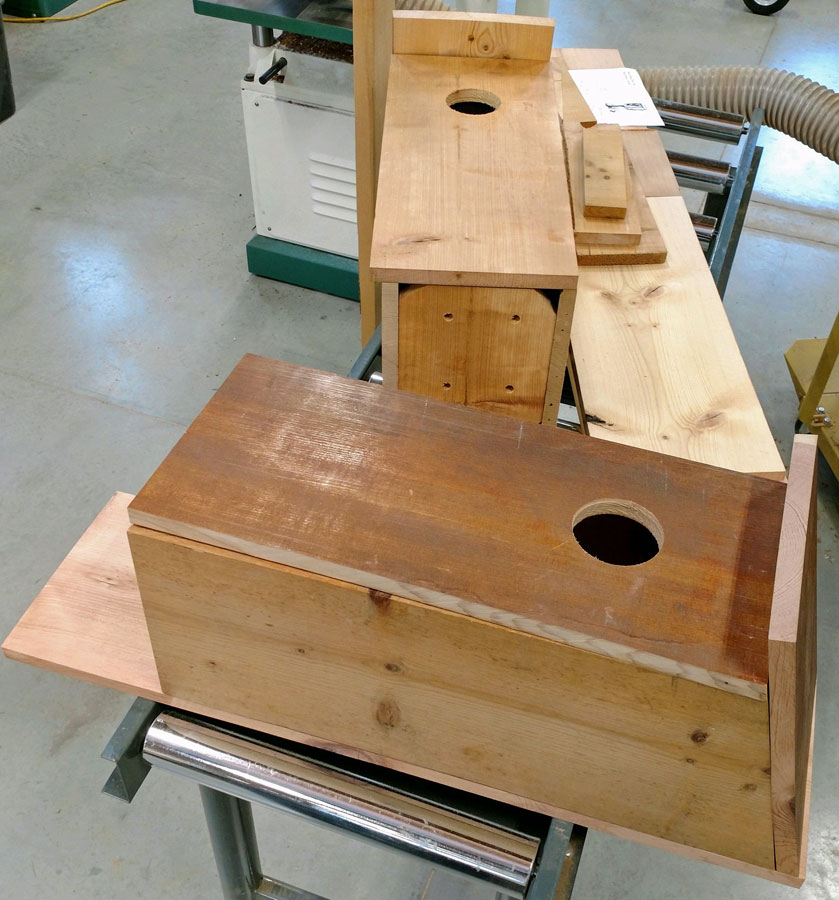 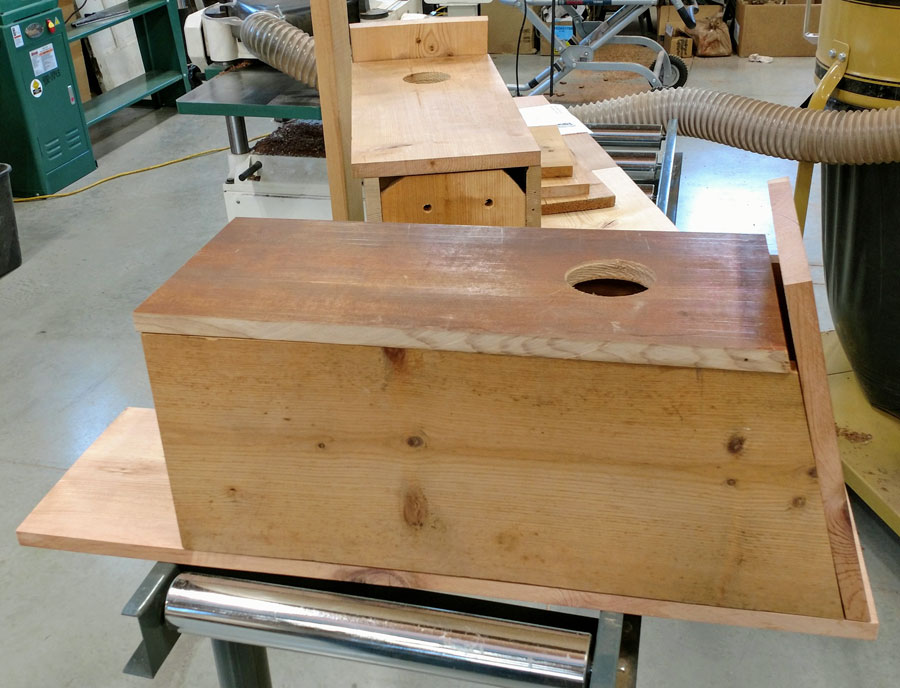 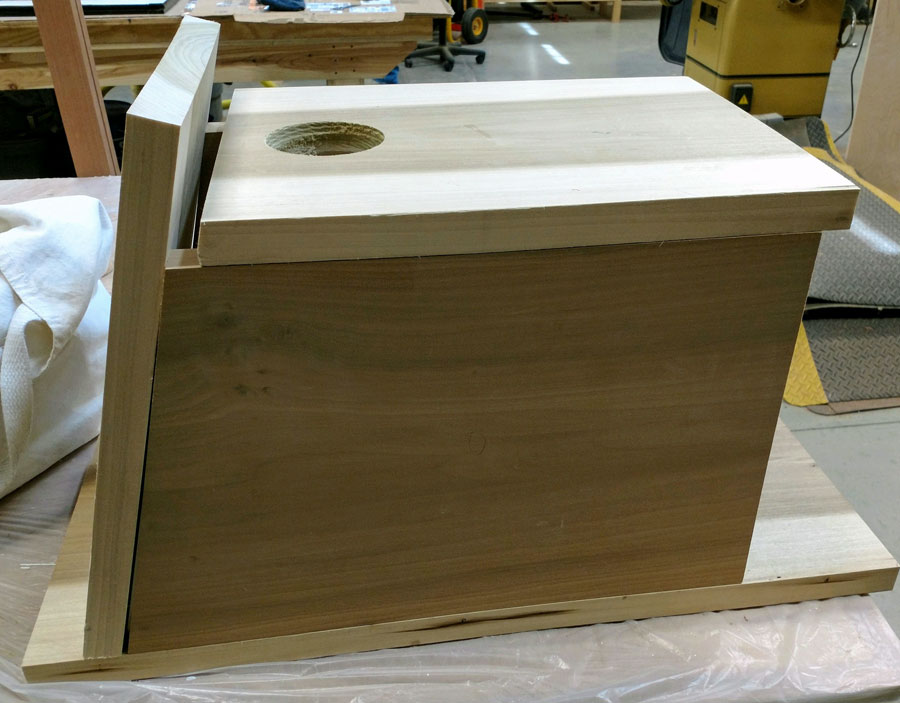 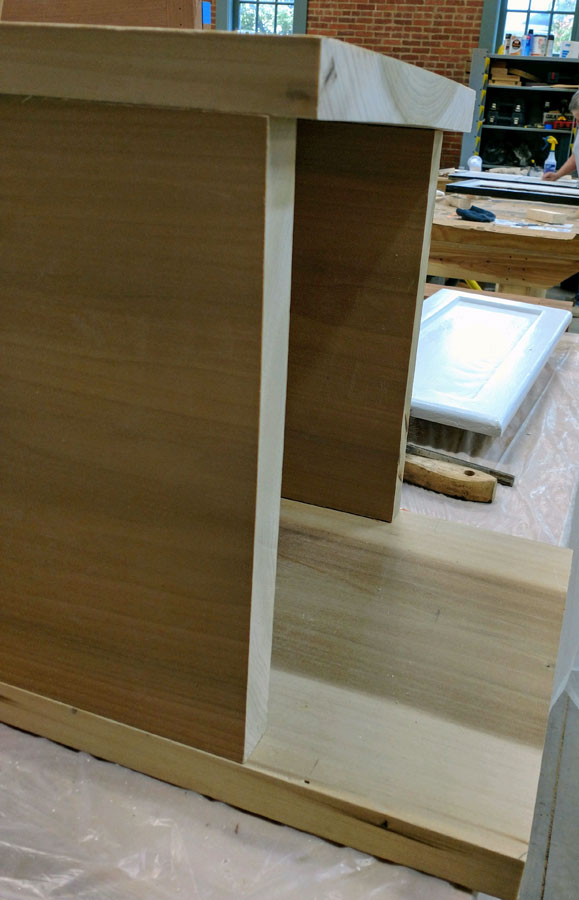 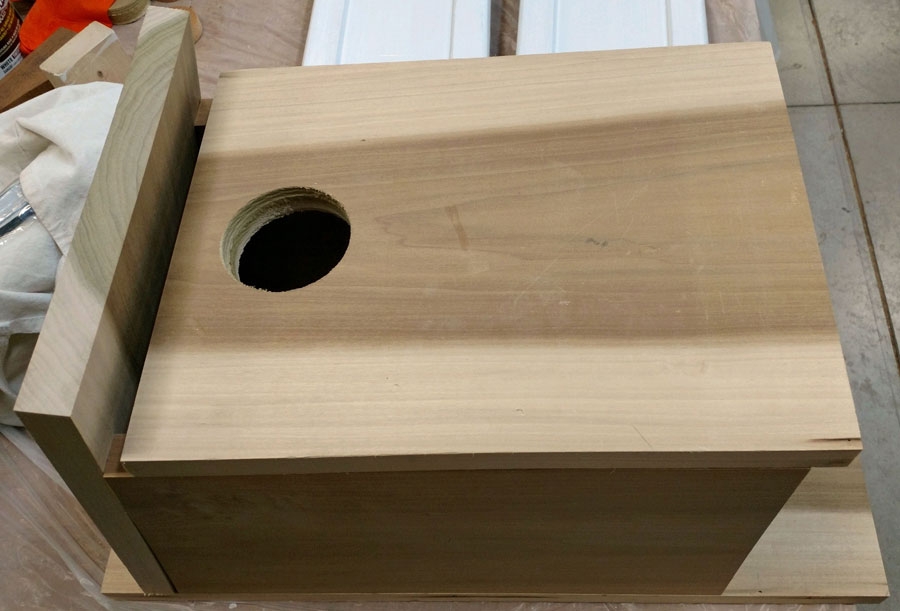 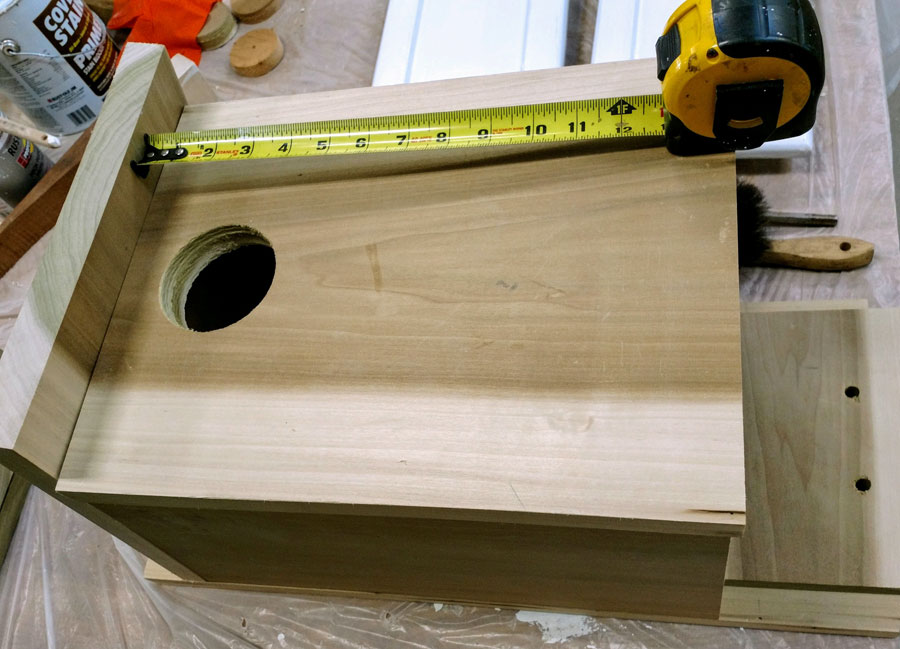 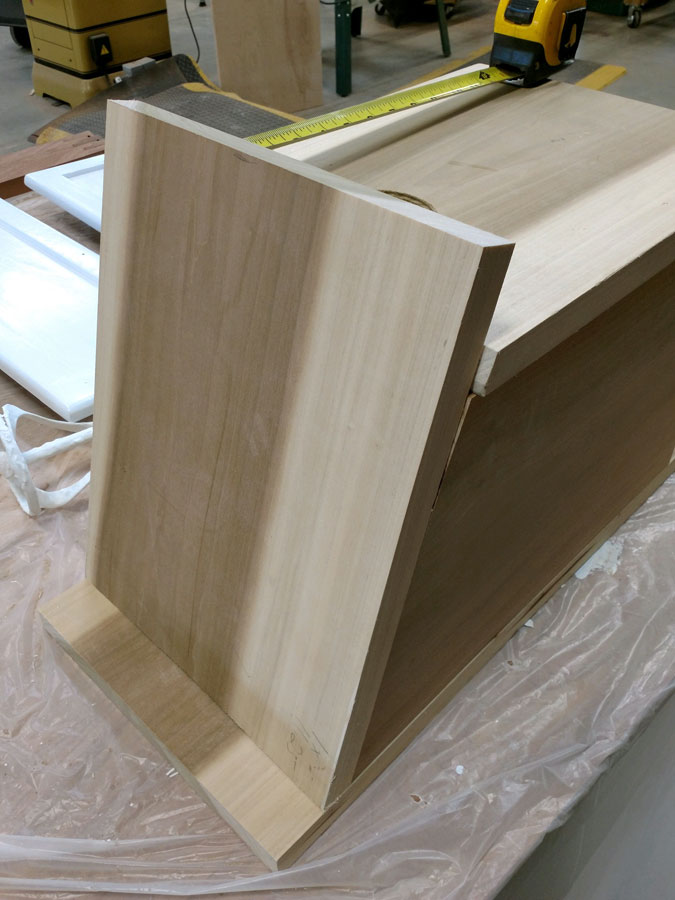 And the last ones... 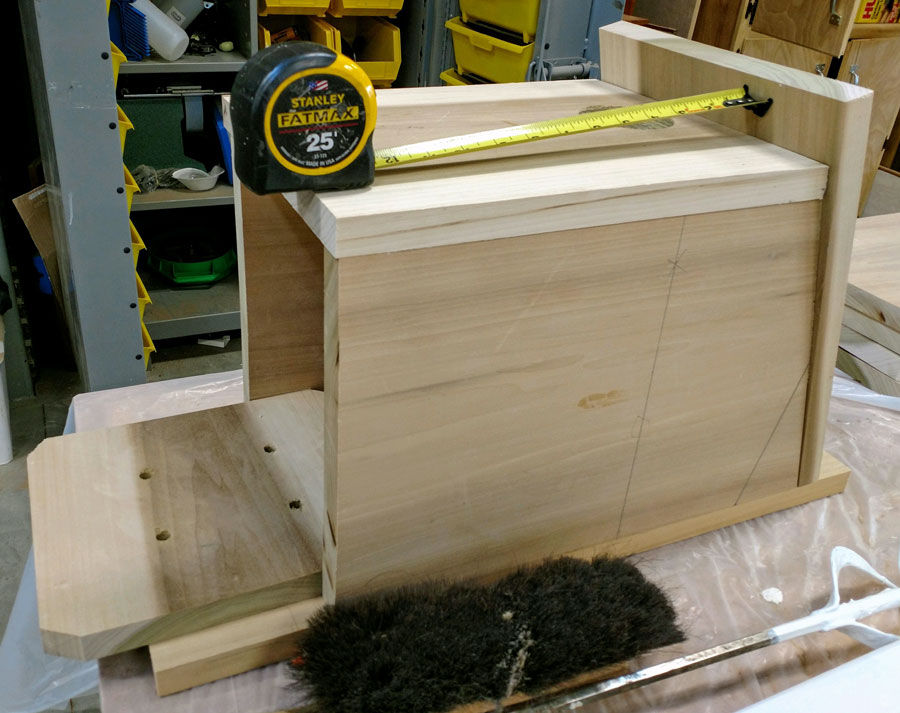 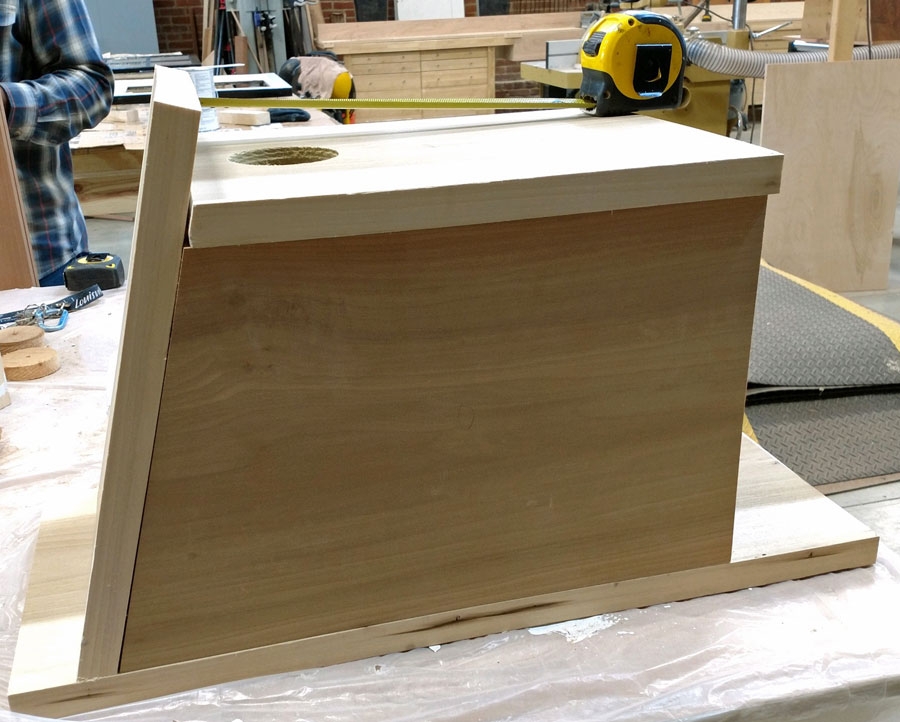 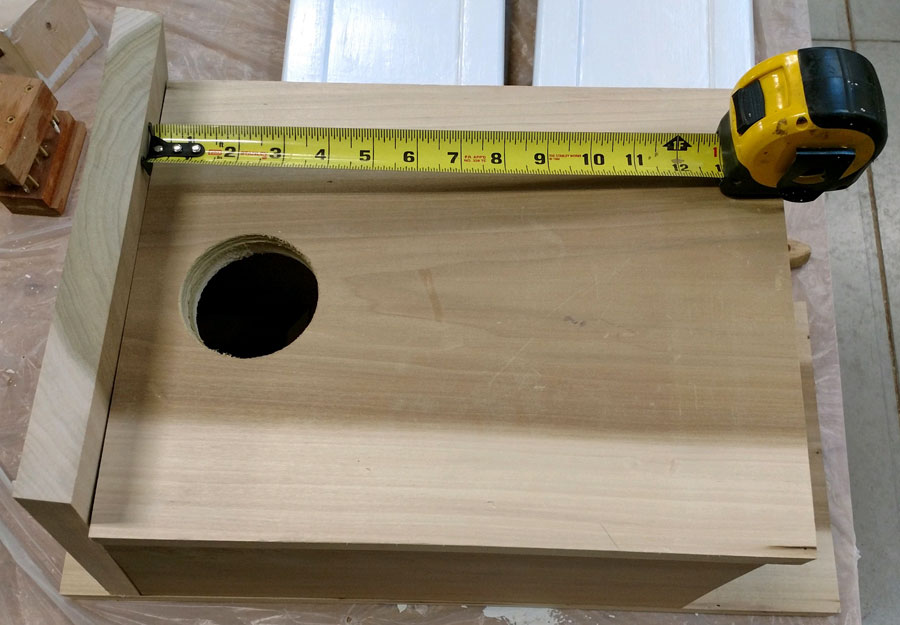 Also, I've now seen a few mentions of holes being oval rather than 3" round. However, some say vertical and others horizontal. Given the YouTube video showing a near instantaneous predation of a screech owl sitting on a nest in a box by a red-tailed hawk, I'm a little loathe to enlarge the hole without some discussion. I'm also thinking of adding another layer of wood over the hole (think wooden hole protector) to make it more difficult for squirrels to chew into and to make it more difficult for predators. Would appreciate any views on this as well.

BTW, Here is the redtail predation of a mother screech on chicks. Hole is pretty far down on box. Don't watch if a predation event will seriously affect you.

Good Day, We have been studying AMER. KESTRELS for 8 years and have had many innovations and ideas on the nest boxes.

The oval hole works well at near fledge so 2 youngsters may perch and have room. (see photo below). As fare as predators, we have seen no change from round to oval hole 4 inches horizontal & 3 inches vertical. In our area we have crows, magpies, coopers hawks, sharp-shinned hawks and occasional red-tailed hawk. You will also notice that our boxes are taller, this is to accommodate IP cameras for our HD LIVE STREAMS. This change is not needed for boxes with no camera. The overhanging & sloped roof (see photo below) is another improvement, which helps in the rain situation. Also all the opening doors should be not cut flat but at around 22 to 45 degree angle, again for rain infiltration. Defiantly DO NOT PAINT OR STAIN the boxes, it is not needed. Hinges we use are galvanized and work well. These are all ideas which we have implemented for Kestrels our knowledge on the owls is very limited. We are always incorporating new ideas into our nest boxes to less stress our Kestrels. You can read about our experiences and more link to    http://www.nu-sun.com/html/kestrel_korner.html   on our web site. If we may help you in any way please contact us.  Have a nice day, Nu-Sun Cinema, Winnipeg, Manitoba, Canada. 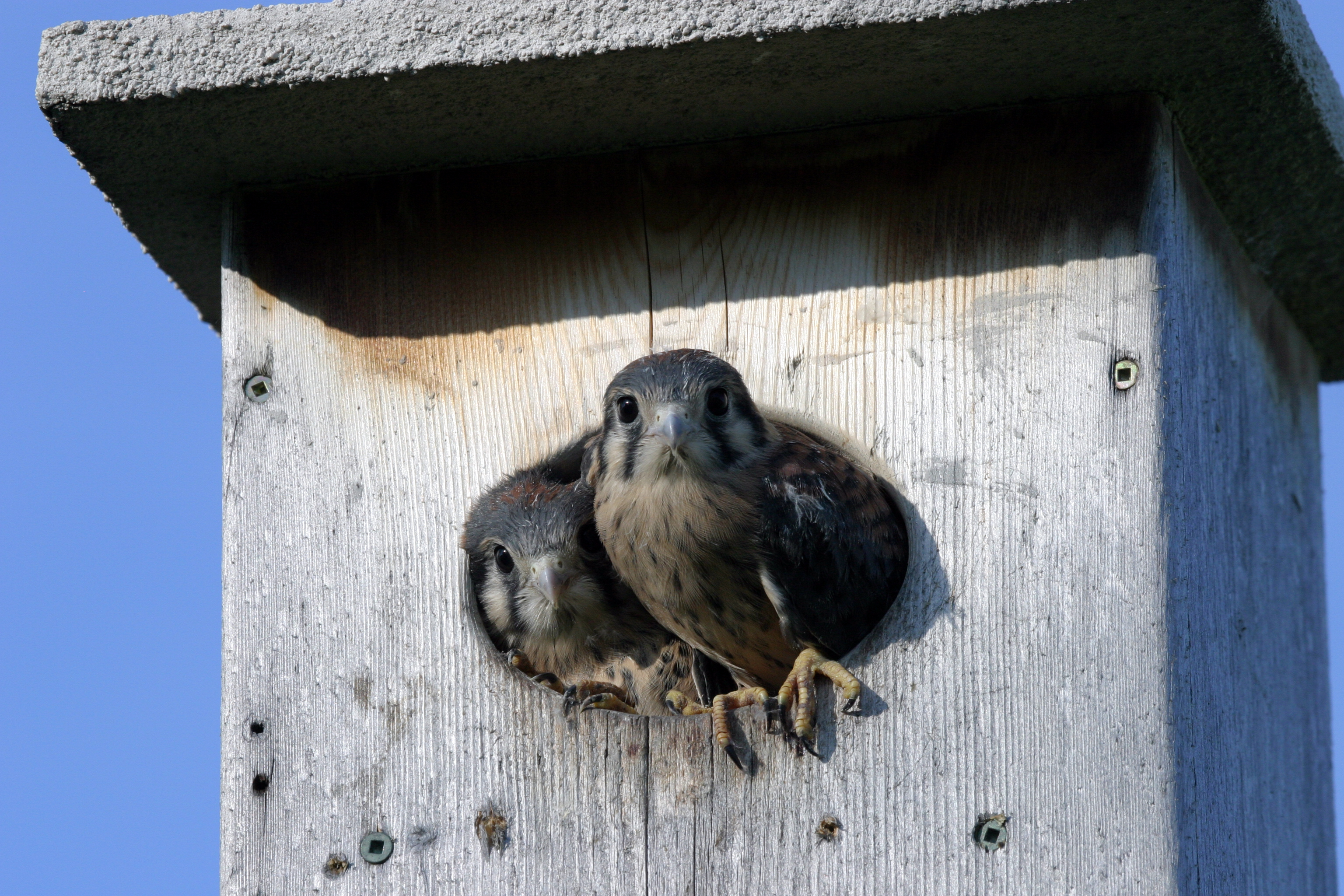 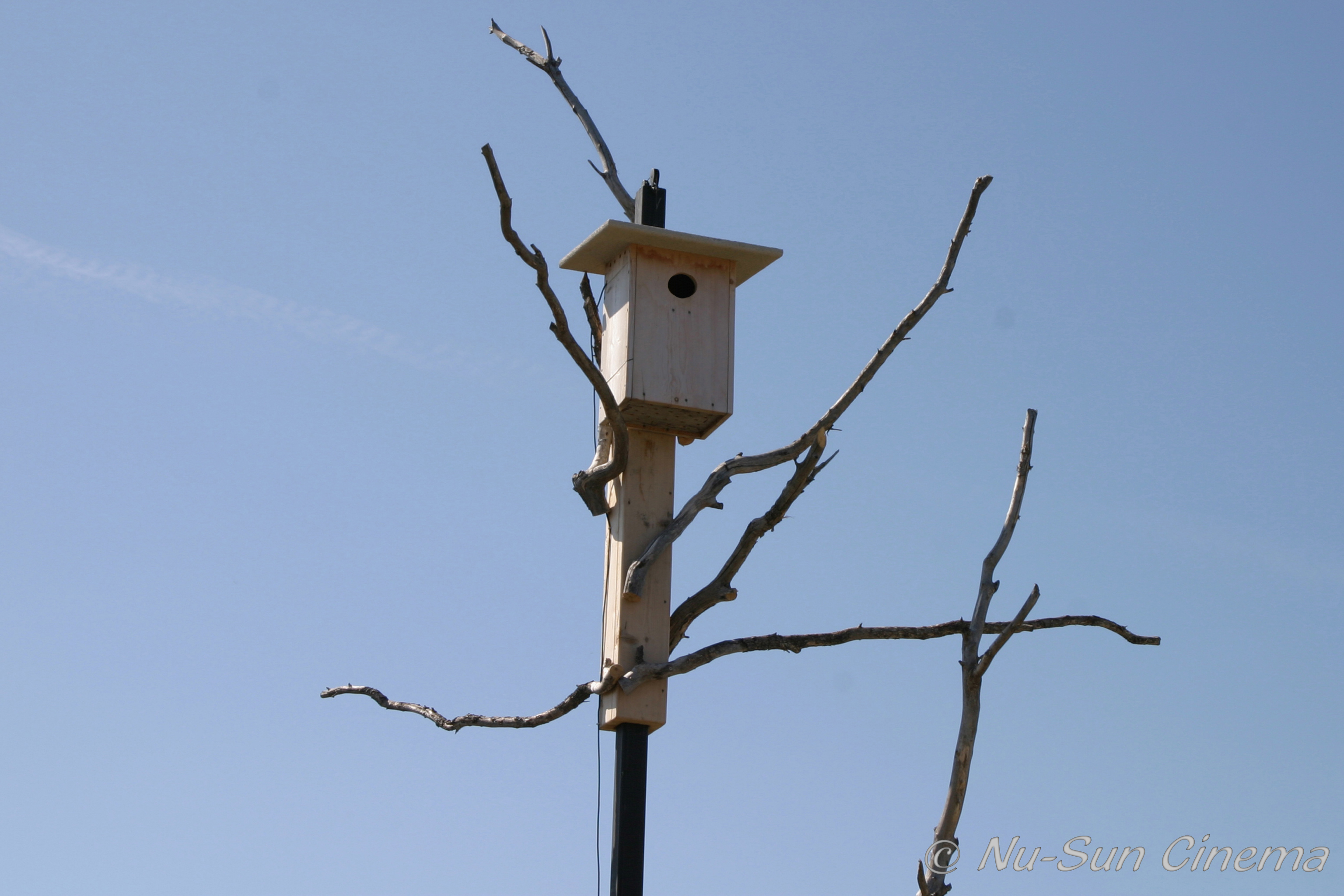